Krill and fish were sampled acoustically and visually beneath the fast ice using the tethered SCINI ROV, which was deployed and operated through a 25 cm diameter hole drilled through the sea ice. SCINI contained cameras and thrusters, and towed a sensor package consisting of a WET Labs fluorometer (ECO-AFL/FL) and a single-beam Biosonics 120 kHz DT-X echosounder. Visual targets were identified to the lowest taxon possible; these observations were used primarily to verify classification of acoustic signals. The echosounder operated at a nominal ping rate of 1 ping s-1; however, this rate was occasionally adjusted if false bottom signals were observed. The general profile of a dive included a surface transect of ~300 m horizontal distance, where the acoustic transducer faced downward, and also a dive to ~120 m if conditions allowed. Echogram data were saved to a depth of 500 m, and background noise was removed. Given the effective range of the transducer of approximately 100 m (resolving -80 dB targets), surveys characterized the upper 200 m of the water column.

Raw acoustic data were analyzed using Echoview software (version 5.3). All acoustic aggregations greater than 4 pings in width were manually delineated, and acoustic energy of the aggregations was integrated into bins of six seconds wide by 1 m in depth. These aggregations were classified as potentially krill or silverfish, based upon ROV visual identification of the targets, or where no visual targets were encountered, by comparing the aggregation target strength, shape, density, and texture and depth to a set of aggregations with positive visual classification. Finally, the all classified volume backscatter was summed and to arrive at station means, and a weighted mean depth was also found. Acoustic returns are presented as integrated acoustic energy (volume backscatter strength [Sv], in units of dB re m-1).

Extracted from the NSF award abstract:

The research project investigates the importance of top down forcing on pelagic food webs. The relatively pristine Ross Sea includes large populations of upper-level predators such as minke and killer whales, Adélie and Emperor penguins, and Antarctic toothfish. This project focuses on food web interactions of Adélie penguins, minke whales, and the fish-eating Ross Sea killer whales, all of which exert foraging pressure on their main prey, crystal krill (Euphausia cyrstallorophias) and silver fish (Pleuragramma antarcticum) in McMurdo Sound.

The investigators used a video- and acoustic-capable ROV, and standard biological and environmental sensors to quantify the abundance and distribution of phytoplankton, sea ice biota, prey, and relevant habitat data.  The sampling area included 37 stations across an 30 x 15 km section of McMurdo Sound, stratified by distance from the ice edge as a proxy for air-breathing predator access. This study will be among the first to assess top-down forcing in the Ross Sea ecosystem and will form the basis for multidisciplinary studies in the future. 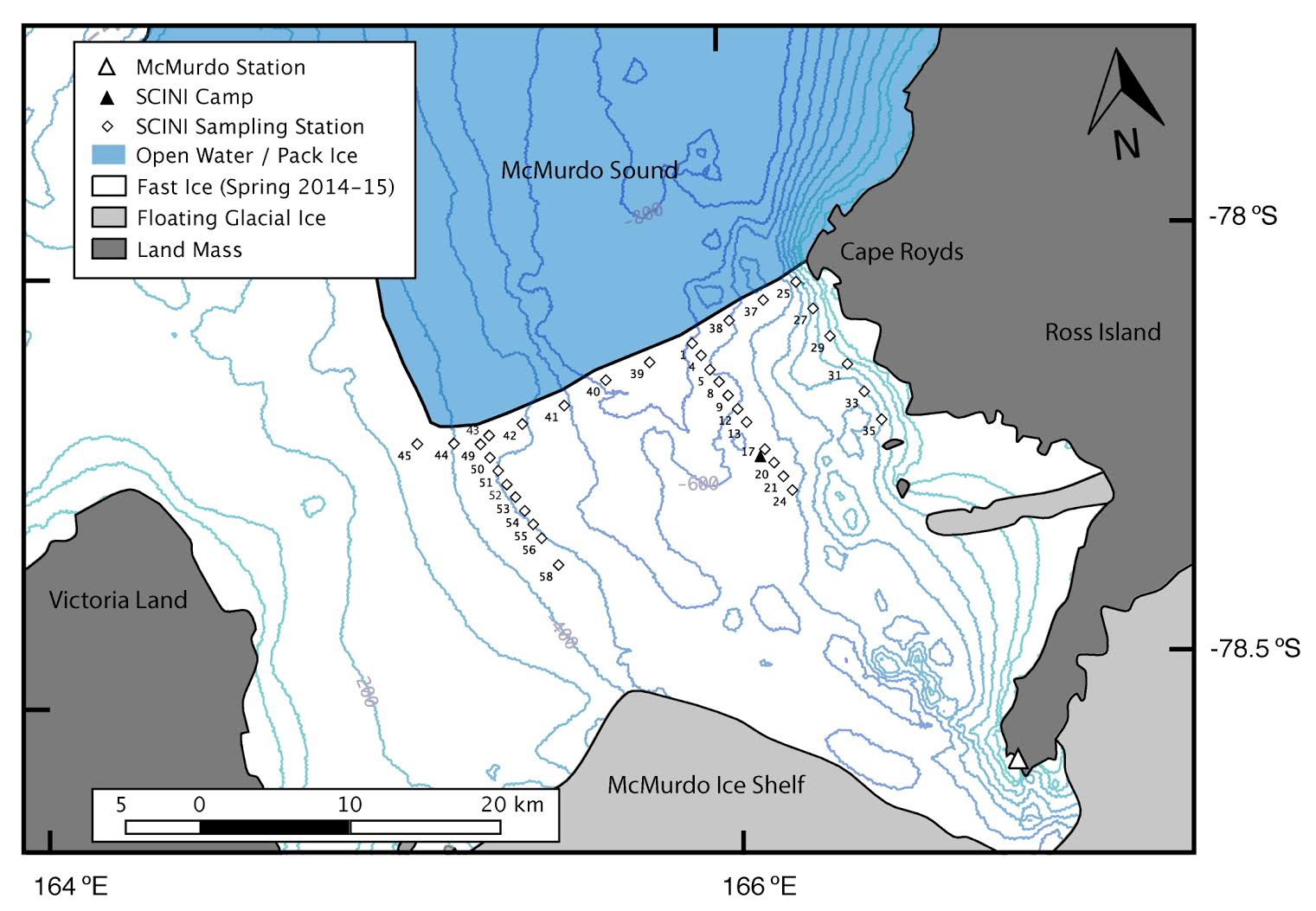